U.S. LNG Is Just Getting Started

U.S. LNG Is Just Getting Started

Driven by vast reserves of natural gas unlocked by the shale revolution, U.S. gas production is flourishing like never before. Gas output is breaking records and with domestic prices well below those seen internationally, several firms are building LNG terminals to export this gas.

Cheniere’s Sabine Pass was the first major export terminal in the country, beginning shipments in mid-2016, but this was just the start. Dominion’s Cove Point entered service in early 2018, while Cheniere’s Corpus Christi terminal began service in December 2018. These have given the country a combined 4.87 Bcf/d of export capacity, making the U.S. a major player in global LNG.

New facilities and expansions to existing terminals are scheduled to boost this significantly, however, as three other terminals will come online in the next year. Kinder Morgan’s Elba Island, Sempra Energy’s Cameron LNG and the privately-held Freeport LNG are all expected to begin operations this year. Expansions at Sabine Pass and Corpus Christi will increase U.S. export capacity still further.

These six plants are often considered the first wave of U.S. LNG. In total, the U.S. will have over 10.6 Bcf/d of export capacity by late 2021, making it the world’s third-largest LNG exporter. 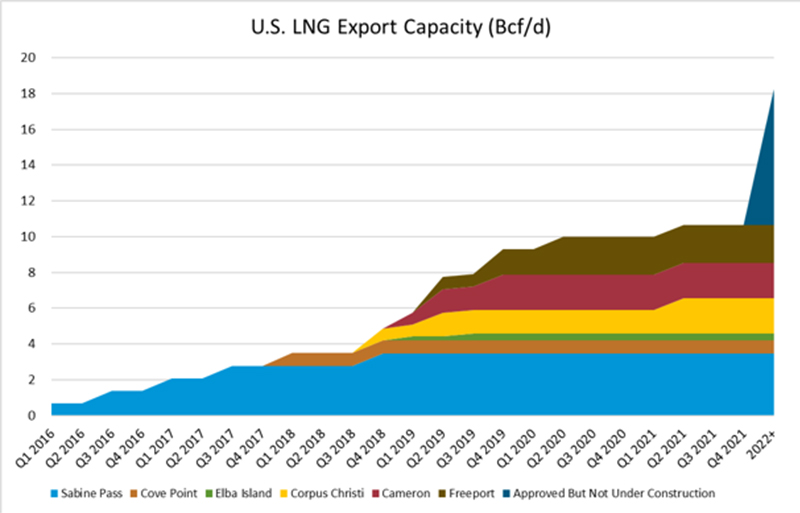 A second wave is in the works, as five projects have received regulatory approval but have not yet begun construction. If completed these terminals will add a further 7.6 Bcf/d to U.S. export capacity.

The rise of LNG exporting is a major development for gas producers, as these terminals represent large steady demand sources. LNG exports will smooth the seasonal variability seen in domestic demand, while allowing American gas to flow to high-priced international markets.

Energy Investment Group is actively on top of the latest news and trends that affect the oil and gas industry. Is oil and gas investing right for your portfolio? Get the truth.

Click here to have an Energy Investment Group expert reach out to you, or simply call us at (800) 830-3029 to start a no-obligation conversation.

Sorry, the comment form is closed at this time.