The Treadmill of U.S. Shale

The Treadmill of U.S. Shale

The Q4 2018 downturn in oil prices has made U.S. crude oil production growth a major uncertainty for markets. Companies have announced plans to scale back drilling activities for 2019, but what will the overall effect of the reduction in drilling be?

How much can activity drop before a lack of drilling causes a decrease in overall output? The 2014-2016 downturn stopped seven years of production growth in its tracks, and American oil output declined from 2015 to 2016.

Only 558 rigs are needed to replicate 2014’s new production

The efficiencies companies have achieved in the past four years mean that a downturn in oil price will have less of an effect on overall U.S. production. Modern rigs in the major shale basins are yielding nearly three times more production than rigs from January 2014. Improved technologies and techniques have combined with more optimal drilling locations and targets to produce significant improvements in efficiency over the past five years.

While rig counts never returned to pre-downturn levels, production growth set records in 2018. American oil production surged by 1.58 MMBOPD in 2018, a 17% increase. This is the largest absolute growth in U.S history, and the second-largest percentage growth in 80 years.

Based on current per-rig productivity the major shale basins could replicate 2014 activity, when production grew by 1.29 MMBOPD, with only 544 rigs. Rig counts in the major basins, then, could decline by 40% and still yield new production at 2014 levels

However, 729 rigs are required to keep production constant

Simply replicating 2014’s new production is not enough, though, as the decline curve in shale is a major factor.

Estimates suggest existing production in the major shale basins declined by 533 MBOPD and 2.6 Bcf/d in February 2019 alone. This decline is a treadmill that producers are running on, and new wells must produce even more than this to create growth.

Based on current productivity, replacing production declines in the major shale basins would require 746 rigs, 80% of current activity. The share of “surplus rigs” – ones that are contributing to growth beyond just maintaining existing production – varies significantly among different basins. The Haynesville and Niobrara currently have the highest proportion of surplus rigs, as the Haynesville rig count could decline by 34% and activity in the Niobrara could drop 31% while keeping production steady.

The massive growth seen from the Permian, growth that has overwhelmed takeaway capacity and is noticeably influencing the global oil market, is currently being driven by only 25% of the rigs active in the basin. All others, about 360 of the 475 currently active, are simply keeping production steady. 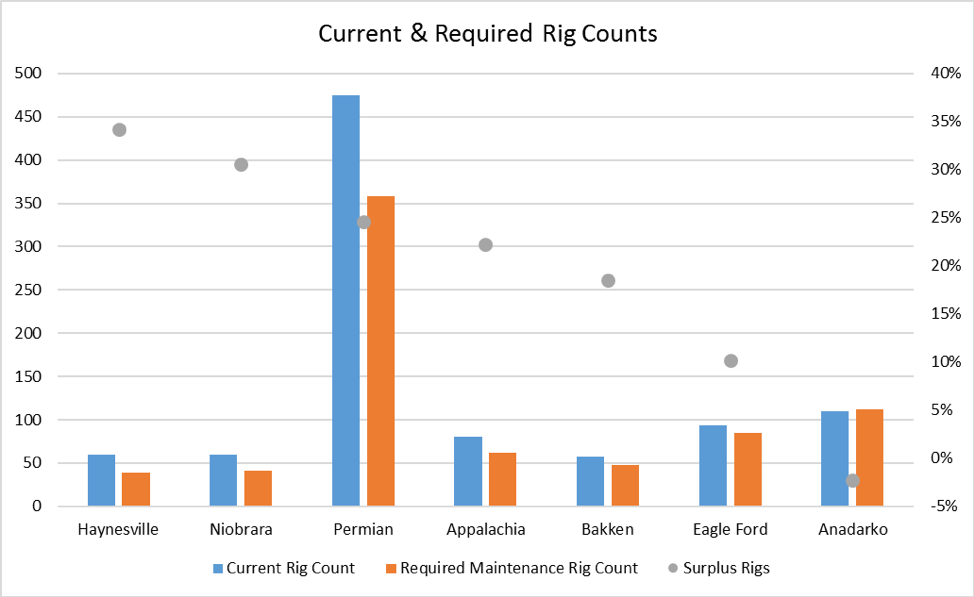 In the event of an actual extended decline in overall activity, per-rig efficiencies will improve. Drilling currently outpaces completions in five of the seven major shale basins, meaning that rig operations do not always immediately translate into new production. An extended decline in oil price would likely see a decline in DUC count, as producers shift to completing existing wells over drilling new ones. This means fewer rigs would be required to hold production steady.

Extended declines in prices would also affect the required rig count through a shift in the decline curve. If oil production held flat for an extended period, the monthly legacy production decline would likely decrease. Shale wells decline precipitously during the first year of operation, but this decline moderates significantly as time goes on. Steady production rather than growth would mean the average age of shale wells would increase, decreasing the production replacement requirements.

Energy Investment Group is actively on top of the latest news and trends that affect the oil and gas industry. Is oil and gas investing right for your portfolio? Get the truth.

Click here to have an Energy Investment Group expert reach out to you, or simply call us at (800) 830-3029 to start a no-obligation conversation.

Sorry, the comment form is closed at this time.